Exhibition Dates: 13 January – 24 February 2007
For his debut exhibition in the UK, Dutch artist Gabriel Lester presented a series of three works which related to the illusions of cinema and theatre. Each work represented a different aspect of the ‘set’ or ‘scene’ – stage, scenery and sound. As such, the three works could be seen as the three basic elements of a theatrical or cinematic narrative: location, setting and action. In a reversal of the expected illusion of the performing arts, the theatre scenery wais moved to the foreground and became a sculpture itself.

BIG BANG (2007), a room-sized sculpture commissioned for Bloomberg SPACE, which filled the double height of the first gallery, took the form of a series of stage flats through which the visitor was invited to walk. Only upon reaching the front of the stage is the illusion fully revealed. Taking its cue from the devices employed in baroque ceiling painting, Lester’s sculpture telescopes time and space while also appearing to extend beyond the architectural framework of the gallery. By contrast How to Act (2000) takes the appearance of an empty stage. Coloured lights set into the roof are programmed to accompany a number of audio extracts that are taken from old movies. The audience is encouraged to imagine narratives or events that are evoked by the choreography of light and sound. 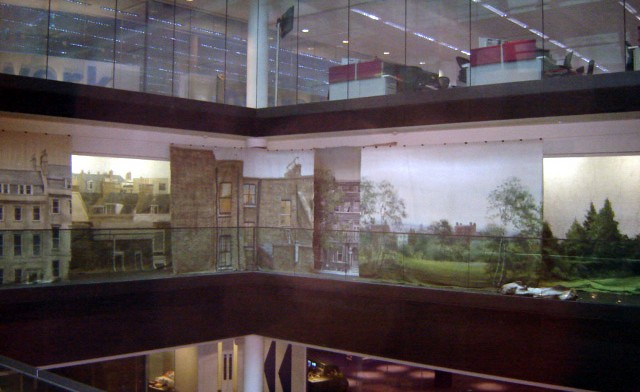